Rules and Regulations For Surrogacy Around the World

Once you’ve decided to start or grow your family through surrogacy, the first decision you’ll need to make is whether to pursue surrogacy domestically — within the United States — or abroad. While no one wants to put a price tag on their child, this is often a decision that’s intertwined with a lot of questions about the expenses associated with surrogacy and how to pay for it.

If you’re considering surrogacy, you’ve probably already encountered a lot of confusing and contradictory information about the rules and regulations pertaining to surrogacy at home and abroad.

While it can be overwhelming in the beginning, remember this — between 1999 and 2013, 18,400 children were born via surrogates in the United States. That means that thousands of families just like yours have come together because of surrogacy. Is the process challenging? Yes. Will it stretch you and challenge your thinking in new ways? Probably. But is it worth it? Absolutely.

If you’re going to successfully navigate the surrogacy process, you’ll first need to understand the differences between surrogacy in the United States and surrogacy abroad. Rules and regulations vary across borders, and not just international borders. In fact, regulations can often differ from state-to-state or region-to-region. Understanding these variations is an important first step to understanding surrogacy and making some important decisions as you begin the process.

Commercial surrogacy — also referred to as contractual surrogacy — is a surrogacy agreement in which an individual or couple agrees to pay a surrogate mother a previously determined amount of money in return for her willingness to carry their child.

Typically in commercial surrogacy, potential parents will pay the surrogate fee in addition to any medical expenses and loss of work expenses the surrogate incurs during the process. The terms and conditions of the surrogacy are determined between the couple and the surrogate with the help of legal professionals, as well as the agency they choose to work with. However, the terms must always reflect the laws of the region in which the surrogate lives.

Understanding the difference between commercial surrogacy and compassionate surrogacy is important because some places vary in their acceptance of surrogacy based on these definitions. Why? In some parts of the world, a woman carrying another person’s child for money is classified under the law as human trafficking. While this may sound extreme — and we’ll talk about it later — there are some parts of the world where surrogacy is seen as a great way to make money and women are taken advantage of. 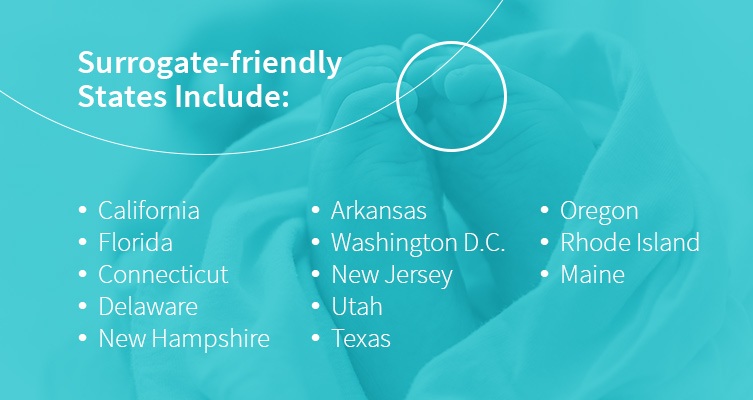 This is not the case in the United States, but each state has still established its own rules and regulations regarding surrogacy. In addition to rules either allowing or prohibiting the practice, many states have established guidelines regarding who the child legally belongs to at birth, who may pursue surrogacy and what rights the intended parents, as well as the surrogate, have throughout the process.

While we strongly believe that commercial surrogacy is a wonderful way for individuals and couples to start the family they’ve always wanted, rules and regulations protecting both the new parents, as well as the surrogate, are still being developed and refined as the process becomes more common in the United States. At this time, there are only three states in the U.S. that explicitly ban surrogacy — New York, Michigan and Louisiana — but there are a number of states whose laws regarding surrogacy just aren’t developed enough for the process to happen smoothly there. That’s why it’s important to know which states are considered “surrogate-friendly.”

Surrogate-friendly states are states whose rules and regulations are clear on their favor of surrogacy and establish favorable terms and conditions that protect all parties throughout the process. Among those commercial surrogate-friendly states are California, Florida, Connecticut, Delaware, New Hampshire, Arkansas, Washington D.C., New Jersey, Utah, Texas, Oregon, Rhode Island and Maine.

While these are not the only states where surrogacy can take place, some other states are more strict about legal issues, as well as what compensation a surrogate can and cannot receive.

Surrogacy Laws Around the World

Each country around the world has its own rules and regulations about surrogacy that can complicate the process. For example, some countries consider the surrogate mother to be the baby’s legal guardian until a certain process is complete or potential parents may have to specify if they want a surrogate to receive payment directly, rather than being compensated through an agency.

These variations in international surrogacy laws can sometimes complicate a baby’s application for citizenship and ability to obtain a passport to travel to the U.S. It can also cause undue stress or hardship on the potential parents, as well as the surrogate. That’s why it’s so important to understand the rules and regulations specific to your surrogate’s home country, as well as your own. Obtaining the services of a reputable organization is essential to preventing problems and navigating the legal minefield that’s out there.

While there’s no way we can go into the nuances of each country’s stance on surrogacy here, for now, it’s important to remember that each country determines whether or not it will allow surrogacy. Some countries are favorable toward the process and international surrogacy agencies have friendly relationships with their counterparts in those countries. However, for either religious or cultural reasons, other countries are not favorable toward commercial surrogacy and do not support it at all.

What Countries Have Banned Surrogacy?

Countries including Italy, Spain, France, Portugal, Bulgaria and Germany prohibit surrogacy in all forms. Other countries, such as the UK, Denmark, Ireland and Belgium, only allow surrogacy if the surrogate is doing it for philanthropical reasons and receives no compensation for it other than paying for her medical expenses. It’s important to understand that from the beginning because knowing what is allowed — or forbidden — can have a big impact on your ability to use a surrogate from that country.

If you’re starting to get confused by these limitations, trust us when we say you aren’t alone. International commercial surrogacy is incredibly confusing because of the lack of consistency between regions and states in regards to what’s okay and what isn’t. 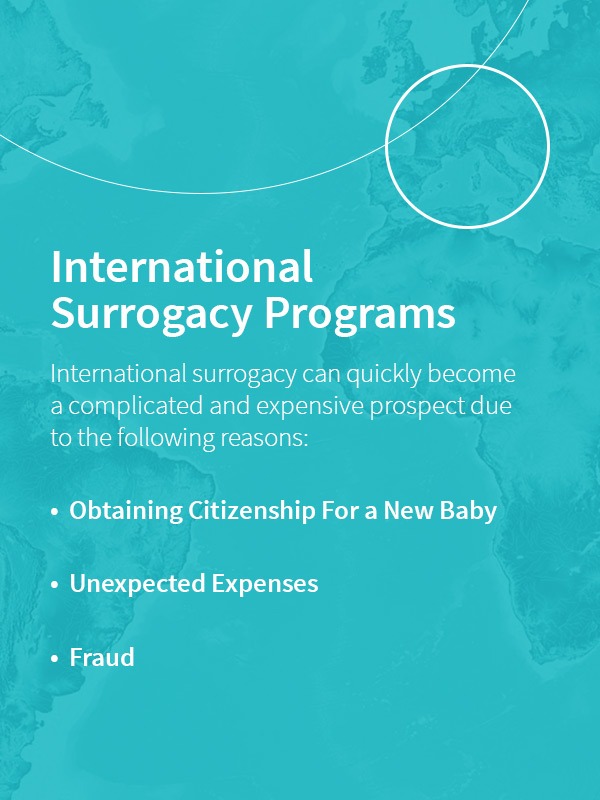 1. Obtaining Citizenship For a New Baby

Even if you provide both the egg and the sperm to create an embryo that will be implanted in a surrogate living outside of the U.S., you cannot apply for that child to have U.S. citizenship until after its birth. Once the baby is born, the State Department has established a strict set of guidelines that families must follow to apply for citizenship and get permission to bring their baby into the United States.

To bring a baby born overseas into the U.S., parents must first establish a biological link between the baby and the parents who are bringing it into the U.S. This is usually done through a DNA test and it must be conducted after the child’s birth. Once they’ve established the biological connection between the baby and its parents, the parents must then submit proof of their own U.S. citizenship and meet certain requirements for residency.

Then, new parents will have to apply for a passport and a Consular Report of Birth Abroad of an American Citizen (CRBA). These documents, which must be obtained at the U.S. embassy in the country where the baby was born, will allow the baby to travel into the U.S. with its parents.

The other problem with international surrogacy laws is that adhering to each country’s rules and regulations may cost a pretty penny. In fact, some couples have found that they spent as much or more on international surrogacy than they would have spent in the U.S. Why? The costs of international air travel, lost wages and paperwork are huge and, if you have to spend any amount of time in the country where your surrogate lives, you’ll be paying hotel and transportation costs as well.

In some cases, a reputable agency may include these into the costs associated with surrogacy, but there is often no way to account for changes in airfare costs, an extra few days in a hotel or a slew of other expenses that can pop up as time goes on.

There is also the very real possibility that the IVF procedure used to place an embryo into a surrogate won’t be successful the first time. Each time an IFV procedure is performed, that’s an additional cost as well.

Unfortunately, laws are different in each country and there isn’t an umbrella agency streamlining processes and regulations. This means that international surrogacy can also result in instances of fraud, where a couple doesn’t get what they’re promised or their money is taken and used for other things besides the birth of a child. In some cases, a couple may discover that the child who was promised to them doesn’t actually share their DNA. Or, they may have been misled regarding the process for which their surrogate’s country handles the process. And, in some rare but unfortunate cases, international surrogates may have been coerced into carrying a child and the money being sent to them never reaches them.

Laws regarding commercial surrogacy can be confusing because there are different laws everywhere. In some cases, laws are established in regard to the religious and cultural beliefs of a certain country. In other cases, laws are established because past cases have shown gaps in the system or revealed injustices being committed against the women being used as surrogates. Different states and countries have different ideas about how things should be done. At times this can be frustrating, but remember that these laws are their ways of protecting the women who might serve as surrogates, as well as potential families.

While international surrogacy does appear to open some doors, it’s a huge risk for potential parents, thanks to the legal issues and uncertain costs associated with it. So what’s a potential parent to do?

Surrogacy is a beautiful option that has provided hope to many individuals and couples around the country. There are thousands of families out there who were brought together because they chose a surrogate to carry their child. How can you protect yourself as you go through the process?

One of the best decisions you can make is to work with a reputable agency like the Western Fertility Institute (WFI). When you work with WFI, our team of experienced, compassionate professionals can help you navigate the process of surrogacy from beginning to end. We’re well-versed in the rules and regulations of surrogacy.

Based in the surrogate-friendly state of California, we’ve done this many, many times before. We can help you understand what you’re facing and navigate the process like a pro! We can explain the financial side of things and help you find ways to keep costs down and ensure finances don’t get in the way of starting a family.

While our knowledge of the law is certainly important, we are proud of the fact that we counsel or families on more than just legal issues and finances. We walk with them as they choose a surrogate, navigate IVF and eagerly await the birth of their child. And when that child is born, we celebrate!

If you’re considering the surrogacy process, let us help you get started. Schedule an appointment today!

This content was medically reviewed by the Western Fertility Institute medical team on July 30, 2019.